Let’s start off with something easy. What is a terminal? Actually, this turns out to be not so easy. I count at least four possible meanings of terminal in a computing context.

First: A terminal(a) or physical terminal (as I might call it) is a hardware device attached to a computer at which humans can interact with that computer. Here are some facts about terminals(a):

Second: A terminal(b) or virtual terminal, also virtual console, is a virtual hardware device. There may be several virtual terminals on each physical terminal. In fact, on a typical Linux system, there are seven usable virtual terminals by default, and you can add more (more on that later). Even though only one person can use a hardware terminal at any given time, that person may maintain several distinct streams of interaction with the computer, one on each virtual terminal.

Switching virtual terminals is usually done by the user by pressing [Ctrl+]Alt+Fn, but it can also be triggered in software using either chvt(1) or the Linux-specific system call ioctl(ttyfd, VT_ACTIVATE, num). Here, num is the number of the virtual terminal you wish to switch to, and the ttyfd argument must be a valid file descriptor to a terminal(c)1.

Third: A terminal(c) or terminal device, also known as a tty, is a Unix device or an associated device special file, usually living in /dev, that provides a software abstraction to either a virtual terminal or a similar kind of device, in the same way that (for example) /dev/sda1 might represent a hard drive or /dev/dsp the speakers. Thus, if you write to /dev/tty1, for example, characters will appear on the first virtual terminal’s virtual screen, which you will be able to see if you then switch to it (or, immediately, if the first virtual terminal is currently active). The following terminal devices are found on a typical system. You will probably see most of them if you list the contents of /dev.

So, if you didn’t know the purpose of these device nodes, well, you’ll find out quite soon. Most of the following parts will be about terminal devices.

Note that a pseudoterminal is often called a pty, and the term “tty” sometimes includes pseudoterminals and serial consoles, and at other times it includes only the system console and numbered virtual terminals. You’ll have to figure it out by context.

Fourth: A terminal(d), or terminal emulator, is a program that provides an interface similar to a virtual terminal; typically, when you start it, it’ll present you with a command shell at which you can type commands and run programs just as you could on an actual virtual terminal. Familiar examples might include xterm, gnome-terminal, konsole, Terminal.app, and iTerm. I might begrudgingly accept Windows’s cmd.exe as a terminal emulator too, but I won’t talk about it at all because (as you will see) it is not like the others, in that it does not employ pseudoterminals, which, indeed, do not exist on Windows at all. 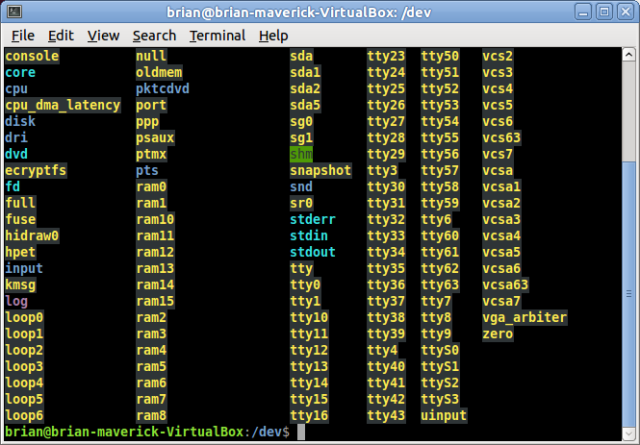 That concludes part one. In part two, I will start talking about terminal devices and how they differ from other kinds of special files.

1 Now, you might ask, what terminal device does ttyfd have to refer to? Shouldn’t this system call only care about one terminal, that is, the one you want to switch to? Well, based on tests I’ve run, the terminal device to which ttyfd refers must be either one of the numbered virtual terminals (such as the currently active one, or the one you want to switch to) or the system console, /dev/console. It will not work if you use a pseudoterminal or one of the serial consoles, /dev/ttyS*.

Hi! I'm Brian Bi. As of November 2014 I live in Sunnyvale, California, USA and I'm a software engineer at Google. Besides code, I also like math, physics, chemistry, and some other miscellaneous things.
View all posts by Brian →
This entry was posted in Uncategorized. Bookmark the permalink.

2 Responses to Terminally confused (part one)